Corals reefs are some of the most diverse and valuable ecosystems on earth. As a result of climate change and over-exploitation of marine resources globally, they are currently under great stress.

Vamizi is becoming an increasingly important site for supporting healthy reefs in East Africa. It has been recognised as a ‘Hope Spot’, a term given to unique places that are critical to the health of the ocean. Any positive influence we succeed with here has an exponential knock-on effect for the worlds’ oceans and the planet as a whole.

The reefs around Vamizi, situated within the Northern Quirimbas Archipelago of Mozambique, are exceptionally diverse. Over 180 different species of coral and more than 400 species of reef fish have been recorded here, with many yet to be discovered. They are also highly productive, with mass coral spawning and fish breeding aggregation sites. In addition, they have a remarkable resilience to bleaching, thanks to the upwelling of cool water from the nearby depths of the Mozambique Channel.

This extraordinary habitat provides a valuable research opportunity to not only improve our understanding of what factors support a healthy reef ecosystem, but also to learn how we can protect these reefs, which may serve as a source of fish and coral larvae to replenish degraded reefs elsewhere along the East African coast.

The waters around Vamizi also play an important role in supporting large marine species such as humpback whales, green and hawksbill turtles, manta rays, and a number of species of dolphin and sharks, many of which aggregate at certain times of the year as part of their breeding cycle. By studying the movement patterns of these species and knowing where they go from here, we are better able to design well-targeted conservation strategies to ensure their survival.

Vamizi’s rich reef ecosystem is located at the centre of an ocean current network that moves north up the east coast of Africa towards Mnemba Island, and south towards Benguerra Island and Sodwana Bay. These currents carry with them coral and fish larvae from source reefs like Vamizi’s to replenish coral ecosystems along the entire coastline, many of which are degraded and heavily fished.

Through our Oceans Without Borders Care of the Ocean, Marine life and Coastal community initiatives within this region, we have a unique opportunity to support coral reef conservation, and to facilitate research that will improve our understanding of the ecosystem connectivity within the 3 000 km of coastline under our custodianship. 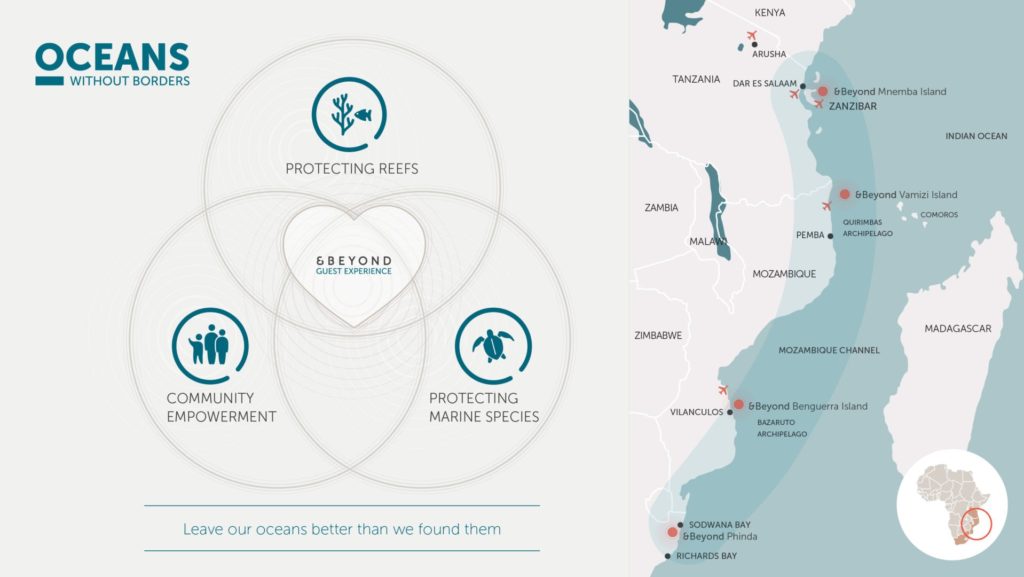 While we have temporarily closed &Beyond Vamizi Island to guests, our marine conservation and community impact initiatives in the Northern Quirimbas Archipelago are continuing through Oceans Without Borders.